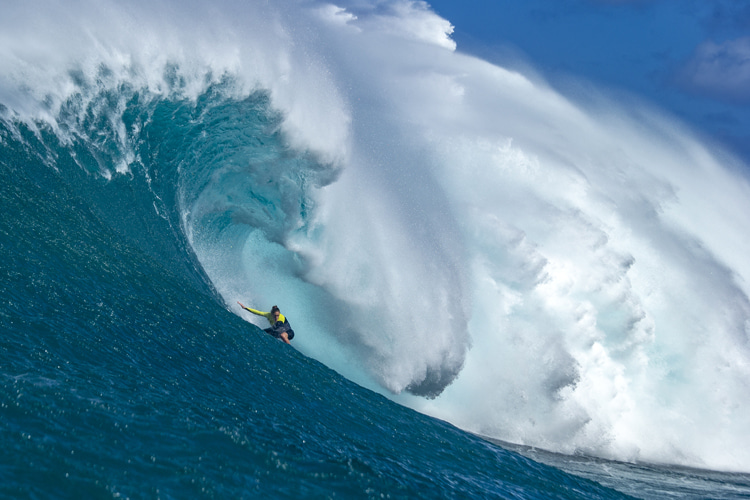 Justine Dupont is one of the most versatile and well-rounded female surfers on the planet. Here’s how she stormed the big wave surfing world.

A multidisciplinary surfer with a colorful spirit, a curious personality, and an infectious smile, it’s relatively easy to like Justine Dupont. She’s highly sociable, kind, passionate, and a hopeless life lover, but when the discussion shifts to surfing, it’s a different story.

Whether she’s on a tow board, shortboard, longboard, or stand-up paddleboard, Dupont is constantly pushing herself more and more. The chair of the International Surfing Association (ISA) Athletes’ Commission takes her job seriously. Step by step, slowly but steadily, she became a performance obsessed, superb tube rider capable of challenging waves that average men can only dream of.

Justine always loved to be in the ocean from an early age and, with time, learned to develop and control her relationship with fear. The infamous 2021 barrel at Jaws is among her favorite rides of all time. It’s a wave that definitely deserves a look from all angles. Adventure lover Dupont keeps saying she is not chasing wins – she surfs for herself. But how has this talented lady become one of the most successful competitive female surfers of all time?

Justine Dupont was born on July 26, 1991, in Bordeaux, France. She started surfing at the age of 11 in Lacanau after stealing her father’s surfboard and running to the beach. “When I was little, I was scared of big waves,” Dupont revealed. As a professional surfer, I competed, and at the end of the season, I was lucky because winter would arrive, and I could surf bigger waves.” Dupont soon realized she was attracted to colossal mountains of moving water and started testing herself in the most extreme environments.

“In my life, everything revolves around surfing,” the Frenchwoman notes. “I’ve been competing in water sports since I was very young – swimming, windsurfing, and then surfing. But I really love big waves. You’re confronted with so many things. It’s Nature that’s in charge.”

Her first major trophy came when, at 15 years old, she was crowned national longboard champion. In 2012, Justine qualified for the Women’s Championship Tour but suffered an injury before her inaugural event. It was a massive blow to her dreams, but the shattered glass quickly melted and recomposed itself.

In 2013, the French surfer became the first woman to ride 50-foot (15 meters) waves at Belharra, the offshore reef break located off the coast of the Basque Country. Dupont is a competitive machine in every single arena she enters. She won individual and team gold medals at the ISA World Surfing Games in 2013, 2017, and 2019. The regular-footer is also an accomplished stand-up paddleboarder and longboarder with European and world titles in her trophy room.

In 2021, Justine Dupont won “Ride of the Year,” “Biggest Tow,” and “Performer of the Year” at the Big Wave Awards for her season at Jaws and Nazaré. It has been considered one of the best winter performances in big wave surfing history, male or female.

On November 13, 2021, the fearless surfer rode one of the biggest waves of her career at Praia do Norte, Nazaré, Portugal. According to several witnesses and photos, the wave measured between 65 and 68 feet (19.8-20.7 meters). If it had been officially validated, it would’ve broken the Guinness World Record, which was in the hands of Brazilian daredevil Maya Gabeira.

Released in June 2021, the documentary “Enfer & Paradis” follows the daily life of a woman who calls Nazaré her second home. The 53-minute movie directed by Antoine Chicoye, Michael Darrigade, and Alex Lesbats unveils the mental preparation, the training regime, and the behind-the-scene moments of Justine’s routine as she gets ready to tame the Atlantic monsters. “You’re never fully in control. It’s good to have a balance between mastering the wave and being able to play with it,” underlines Dupont. “The noise it makes is impressive. It’s so powerful and strong – it gives you chills.”

Read the rest of the article here.